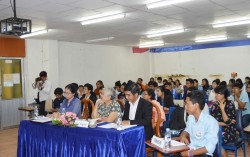 Debating Competition on Women in Leadership

Around 100 people from diversity gathered in a hall of Pannasastra University of Cambodian south campus, to listen debaters under topic “Women in Leadership” on 20 Feb, 2016. Debating competition organized by Joint of Youth-Cambodia (JOY-Cambodia). The debate aims to open a peaceful space to analyze and demonstrate about women’s capacity in leadership, and to […] 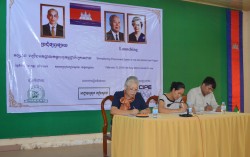 Project named Strengthening Procurement System at the sub-national level, SPSL launched its new target areas in Kean Svay district, Kandal province on 19th Feb, 2016 at Kean Svay district hall. Around 45 people from different sectors such as, officials from Kean Svay district and NGO partners, and local citizens. The launching aims to disseminate the […] 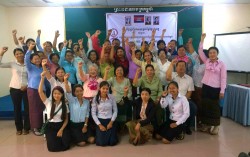 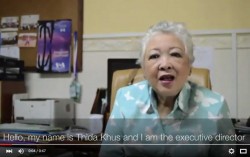 In the occasion One Billion Rising 2016 campaign, Ms. Thida Khus sent a meaningful message to public through a video clip “We have to remember that working to end violence against women and children is to promote self-value.” On 3rd Feb, 2016, Ms. Thida Khus, Executive Director of SILAKA and Chairperson of the Committee to […] 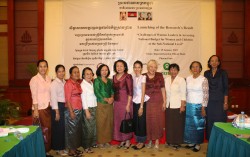 The Committee to Promote Women in Politics which known as “CPWP”, launched its research under the theme of “Challenges of Women Leaders at Sub-National Level in Accessing National Budget for Women and children” on January 29th, 2016 at Imperial Garden Villa and Hotel, Phnom Penh. Around 94 participants were invited participate in the launching, from […]