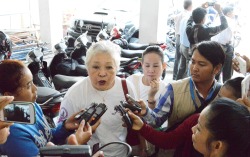 While the Permanent Commission of the National Assembly of Cambodia and the two leading political parties were busy with their work on the formation of the members of the National Election Committee.  The Committee to Promote Women in Politics and SILAKA in collaboration with the Cambodian Women Caucus, the Gender & Development Network, the Cambodian […] 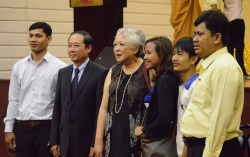 Youth in the ASEAN Economic Integration 2015

In her opening speech at Cambodian Youth Forum under the theme of Cambodia Youth Future in the ASEAN Economic Integration 2015 which was held on 29th March 2015 at Tonle Basac Restaurant 2, in Phnom Penh. Ms. Thida Khus, Executive Director of SILAKA and Chairperson of the Committee to Promote Women in Politics (CPWP), she said […]

Phnom Penh- 24th February 2015 at Himawari Hotel, SILAKA and CPWP in collaboration with NGO CEDAW, Cambodia Women Caucus (CWC), Gender and Development Network (GADNET) and other women networks/NGOs which is supported by UN Women organized the Consultation Workshop “Post-Regional Beijing Platform for Action+20 Review” Moving Toward in purposes are: 1-To brief the NGO’s communities on […]

Promoting Participation Of Women In Politics

Phnom Penh, January 28 2015- We, 250 representatives from women leaders, young women activists, LGBT, and Civil Society Organizations, attended the national workshop on “Promoting Participation of Women in Politics” today, jointly organized by Committee to Promote Women in Politics and SILAKA, with a strong support from regional and international society organizations in country in […]