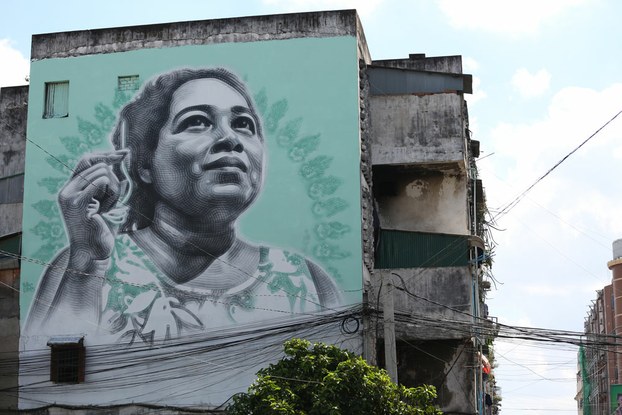 The mural depicting Moeun Thary on the side of the White Building in Phnom Penh. Photo from RFA

The groups of civil society which working on women rights and women empowerment released the joint statement in Khmer Language which showed deeply disappointed that the Phnom Penh Municipal hall decided to remove the mural of woman on 16 Dec, 2015 and call for Cambodian government to reconsider the decisions and release letter to apologize publicly on the removing of the mural.

One day after the painting is finished, the Phnom Penh Municipal hall immediately ordered to remove the mural of woman by claiming that it causes the lose beauty of Phnom Penh and public order. A long with these reasons, Cambodian citizens were unacceptable, especially Cambodian Facebook users have condemned and criticized the authorities that the removing of mural makes Cambodian peoples’ feeling down.

The groups of civil society understand that the mural of women portrayed local artisan Ms. Moeun Thary, who is a hand-embroider traditional Khmer ceremonial garment and had no political message. Moreover, it showed the meanings of women’s role in economics and it is reflected to the real women life and a part of women helped to rebuild Cambodian society after the chronic war.

We call for Cambodian government to reconsider the decisions and release letter to apologize publicly on the removing of the mural, to avoid other meanings that will affect to government’s efforts in her commitments to invest on women equality and to promote women in economics and leadership.

The mural designed by California-based artist Miles “El Mac” MacGregor and displayed on the side of the white building apartment, widely known as “Building” which located in Khan Chamkar Morn, Phnom Penh.

Mr. MacGregor posted in his own blog before the mural was painted that the work is meant to honor Cambodia’s artists both contemporary and those who lost during the bloody Khmer Rouge regime from 1975-1979, which systematically murdered nearly all of the country’s creative population.

The mural was a part of the project called “Igloo Hong”, a number of international artists spent several weeks in Cambodia painting artwork on walls around Phnom Penh and the nearby coastal of Kep province.