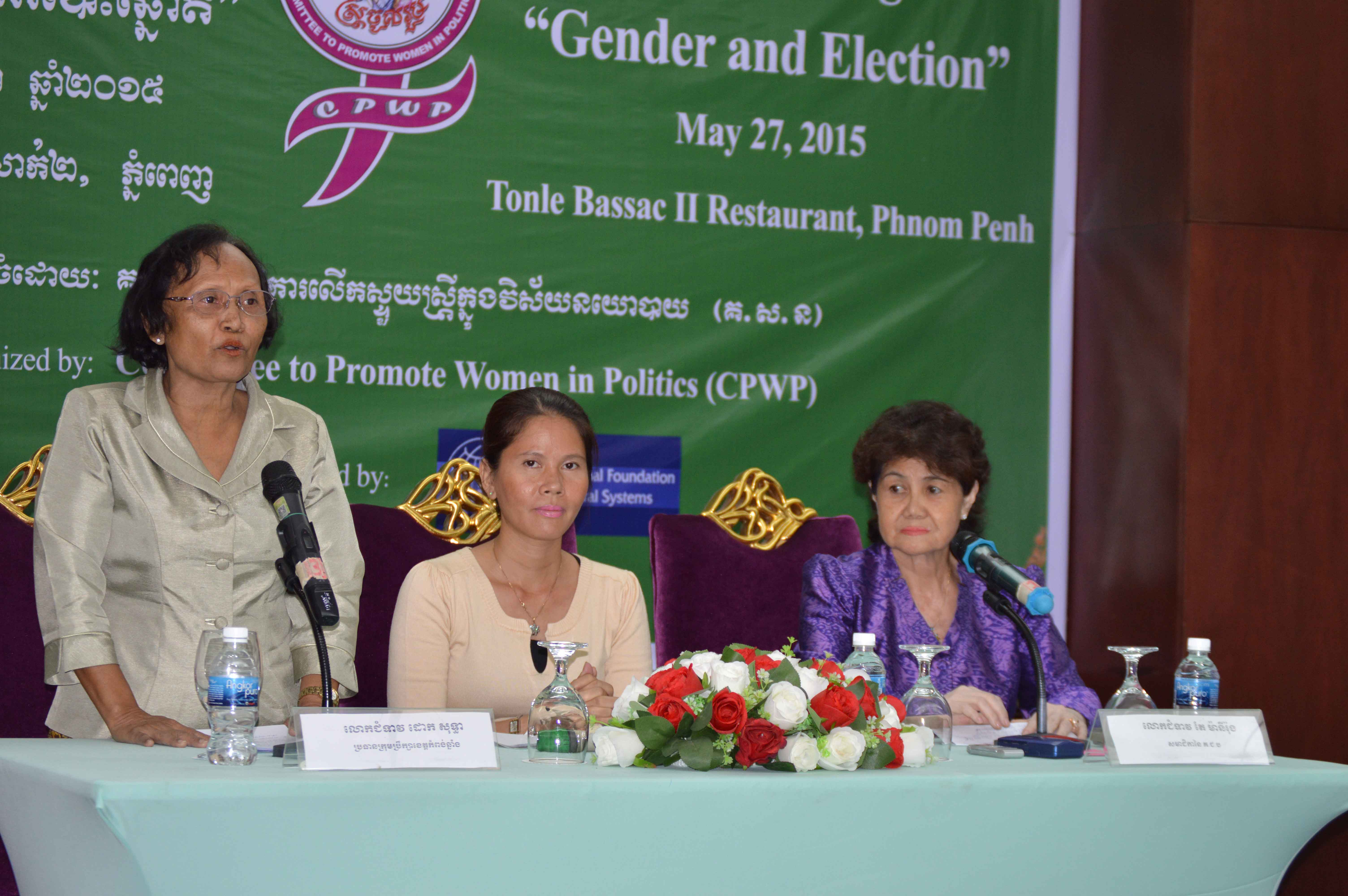 Groups of Women Leaders at the Sub-National Levels from 10 provinces and cities of the Kingdom of Cambodia and a group of Women for All from different institutions submitted a draft of Gender Policy to the president of NEC through  H.E. Ms. Te Manirong, a member of NEC.

On 27 May 2015, the Committee to Promote Women in Politics “CPWP”, SILAKA and groups of women organizations, hosted and coordinated a Public Meeting at Tonle Basac Restaurant II, under the theme of “Gender and the Election”.  There were about 60 active participants, mostly are women leaders from National Assembly, National Election Committee, Ministry of Women Affairs, Women Leaders at Sub-National Levels, Local NGOs, International NGOs and Medias.

The Gender Policy was drafted by 30 women organizations, Women for Development Network, and the Women Leaders at the sub-national levels from 10 provinces and cities of the Kingdom of Cambodia.

The proposed Gender Policy into NEC policy is necessary to ensure the NEC’s missions will be conducted the election with free and fair in accordance with the democratic policy, freedom and multi-political parties.

According to this policy, NEC needs to build and strengthen a system that is transparent and reliable and can be trusted by women and men to have equal participation in the election process, as the Election candidates, or and as the staff at the NEC throughout the country.

H.E. Ms. Te Manirong responded in the official meeting that she will bring this policy to NEC’s President for consideration, and she explained that  for the first step, she wants  NEC to recruit at least from 20 to 30 percent of women to work for NEC.

Mr. Te Chunhak Deputy Director of Gender and Economics Development Department of Ministry of Women Affairs said that “women’s participation in politics will get a chance to be represented in the public sectors and this fact will contribute to the country democracy and development.”

On the middle of April 2015, the National Election Committee “NEC” was formed a new Committee   by emerged the two political parties, CPP and CNRP together. This new committee has 8 men and 1 woman as its member.

At the present time, the election officials, who works for Provincial Election Committee in 25 provinces and cities have a total of 74 officials, among them only 2 people are females.  This is showing that, NEC is not responded to the National Constitution of Cambodia as on article 35 and 45, as well as to Rectangular Strategy of the Royal Government Stage 3, The Millennium Development Goals (MDG) in goal 3, the National Development Strategic Plan 2014-2018 and Treasure Women’s Strategic Plan (Neary Ratanak).